In a letter sent home to students ahead of TNReady testing season, Governor Bill Haslam encourages them to do well and tells them, “Tennessee is behind you.”

Here’s the full text of the letter: 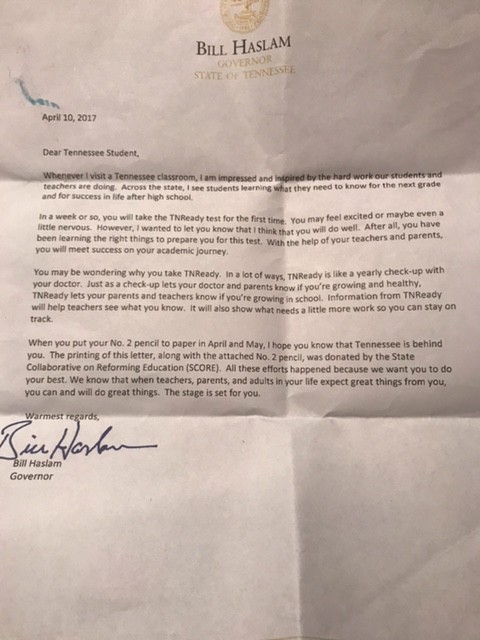 These words of encouragement as well as a handy number 2 pencil were paid for by SCORE.

Here’s the thing: For the past few years, Tennessee hasn’t exactly been “behind” kids. Not in terms of delivering an annual test in an effective manner.

I wrote last year about the new “Rite of Spring.” Here’s what I said then:

Lately, this season has brought another ritual: The Tennessee Department of Education’s failure to deliver student test scores. Each of the last three years has seen TNDOE demonstrate it’s inability to get state testing right (nevermind the over-emphasis on testing to begin with).

Back in 2014, there was a delay in the release of the all-powerful “quick scores” used to help determine student grades. Ultimately, this failure led to an Assistant Commissioner losing her job.

Then, in 2015, the way “quick scores” were computed was changed, creating lots of confusion. The Department was quick to apologize, noting:

We regret this oversight, and we will continue to improve our processes such that we uphold our commitment to transparency, accuracy, and timeliness with regard to data returns, even as we experience changes in personnel.

The processes did not appear to be much improved at all as the 2016 testing cycle got into full swing, with a significant technical failure on Day One.

When it comes to actually getting test administration and subsequent details right, Tennessee hasn’t exactly been “behind” the kids taking the tests.

But this year, armed with a letter from the Governor and a new pencil, the kids are ready. Haslam wants them to do their best, even though the state has been letting them down.