Have you heard about it? Hundreds of seventh grade students all across Tennessee converting to Islam after their world history class. It’s happening everywhere. In rural and urban communities. It’s happening because Tennessee teachers are not just teaching world religions, they are specifically focusing on Islam and indoctrinating our children. They must be, with so many conversions happening every single week.

Actually, so far, no one has reported a single conversion of any student to Islam after taking a seventh grade history class. But you wouldn’t know that if you read the emails from Jay Sekulow’s ACLJ: 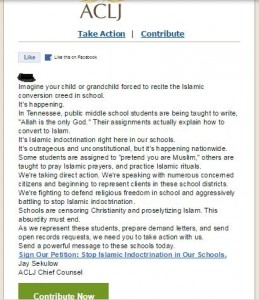 Sekulow surely knows that the ideas espoused in his email are preposterous, but he persists. Likely because he knows ginning up this kind of fear is rather profitable. This report from 2011 details just how profitable his enterprises are.

While fear-mongering for cash is nothing new, it’s dangerous when it impacts the teaching and learning going on in Tennessee classrooms. In response to concerns magnified by Sekulow, the Chair of the Senate Education Committee, Dolores Gresham, sent a letter asking the Commissioner of Education to ensure Tennessee teachers aren’t indoctrinating kids with Muslim teachings.

Interestingly, Sekulow and Gresham aren’t concerned about indoctrination with other world religions taught over the course of the history curriculum. And so far, they haven’t expressed concern about other ideas Tennessee’s teachers may be planting in the unsuspecting heads of our state’s schoolchildren.

Nevertheless, all this “concern” has caused Commissioner of Education Candice McQueen to schedule an early review of the state’s social studies standards. Here’s her memo on the topic:

“In response to questions we have received from the field, we wanted to share clarifying and factual information on the state’s social studies standards, specifically how the standards address religion. We hope that the information below will help you respond to any questions that may arise from parents or community members.Click Here to View the Social Studies Fact SheetStandards: http://tsba.us2.list-manage.com/track/click…World History is taught at three different points in a Tennessee student’s K-12 schooling: grade 6, grade 7, and once in high school. The courses cover World History from the beginning of time to the present and are broken up as follows:Sixth Grade: Early Civilizations through the decline of the Roman EmpireSeventh Grade: The Middle Ages to the exploration of the AmericasHigh School: The Industrial Revolution to the Contemporary WorldMajor religions, including Christianity, Judaism, Buddhism, Hinduism, Confucianism, and Shinto, are covered throughout the courses mentioned above. Although these religions will be taught at some point in these three courses, the focus on each religion will depend on the context and influence of the time period.The attached document titled “Standards” shows the standards covering religion for the sixth- and seventh-grade courses. As you can see in the attached document, Christianity and Judaism are emphasized in the sixth-grade course while the Islamic World is covered in the seventh-grade course.Click Here to View the Social Studies Standards: http://tsba.us2.list-manage.com/track/click…The content of religion in our social studies standards is not new in Tennessee, but the sequence has been revised. The content of the current Islamic World standards has been included in the state’s social studies standards for many years and what students are expected to know about the Islamic World is also consistent with years prior. The new standards have simply moved what was previously spread throughout the social studies standards prior to 2013 (those standards can be found here: http://tn.gov/education/article/academic-standards-archive) to one section in the seventh-grade World History course. Most of the current seventh-grade World History standards were previously contained in sixth-grade and can be found here: http://tn.gov/…/education/attachments/std_arch_ss_gr_6.pdf

The State Board of Education adopted the current social studies standards in July 2013. The standards were developed by a committee of Tennessee teachers and were available for the public and all Tennessee educators to review and provide feedback. Textbooks and CurriculumStandards are academic expectations that define what students should know and be able to do at each grade level. Because districts know their students and communities best, curriculum and instruction are local decisions made by the district, schools, and teachers.There is no state required length of time to be devoted to any topic – that is a local decision; however, the department hopes to share a sample pacing guide soon to give to teachers as an example of how much time should be devoted to any one topic. All textbooks and supplemental materials used to teach these standards are determined at the local level. Additionally, textbooks are not prescriptive of a course’s content and sequence. For example, many people have referenced the seventh-grade textbook, Discovering our Past. While it appears that some seventh-grade teachers are covering Islam longer than Christianity, it’s important to note, that the last chapter of the sixth-grade textbook covers the rise of Christianity extensively. That chapter is repeated at the beginning of the seventh-grade textbook. The textbook commission was recently reconstituted and the new process for textbook adoption provides more opportunity for public input. Members of the public can review books/materials by contacting their local board of education, visiting the state textbook collection site at Middle Tennessee State University (MTSU), and/or viewing the materials posted on the department’s website. Comments can be submitted directly to the department or members of the public can request to speak before the Textbook Commission. All public comments will be posted on the department’s website.Additionally, the bond requirement for textbook publishers was lowered, meaning smaller publishers will now have more opportunity to bid in Tennessee.The State Board of Education annually adopts an approved textbook list, however, districts may request a waiver to use a book not included on the state approved list.AssessmentA social studies field test was administered in the 2014-15 school year. Only a very small number of questions were on this topic. The field test was not used for accountability purposes, but was instead a test to collect information on a wide range of questions to ensure that potential questions are fully vetted and that the operational test uses appropriate questions to assess students learning.Next StepsBased primarily on the results from the field test and feedback from educators and stakeholders, we have made the decision to review the social studies standards earlier than the traditional six-year cycle. Per Public Chapter 423, passed in 2015, the social studies standards review will go through a similar process our math and ELA standards are currently undergoing beginning in January of 2016. This process requires the State Board of Education to post the current standards to a standards review website to allow the public to review and offer feedback. Following the public online review, educator advisory teams will use their expertise and the public comments to revise the standards. The revised standards will then be reviewed by a Standards Recommendation Committee (SRC). As laid out by the General Assembly in Public Chapter 423, the SRC committee members are appointed by the Governor, Lt. Governor and Speaker of the House. The SRC will then recommend the revised standards to the State Board of Education. Following this recommendation, there will be additional opportunity for stakeholder feedback before the State Board issues final approval.The social studies standards review website will be launched in January of 2016, and we encourage educators and community members to utilize this opportunity to provide critical feedback.”

Despite the World History curriculum including learning about Islam and other world religions for years and despite the lack of any affirmative evidence of indoctrination and certainly no evidence of any child converting to Islam as a result of reading about it in a 7th grade textbook, Sekulow presses on. His bank account depends on it. The facts aren’t getting in the way of Dolores Gresham scoring political points, either.

Legislators are also promising legislative action on the social studies curriculum — because what we really need is the Tennessee General Assembly designing curriculum for our schools.

In all of the storm over a curriculum that has been on the books for years, I go back to one central question: With all this supposed indoctrination going on, where’s the evidence that students have converted to Islam? And then, do they convert to Buddhism late on in the semester when that subject is taught?

I don’t suspect Sekulow or Gresham will be answering that question anytime soon.

4 thoughts on “Financed by Fear: Jay Sekulow and the Imaginary Muslim Menace”