The Metro Nashville school board will begin investigating later start times for their high school students. Right now high schools start at 7:05 in the morning.

When looking at this issue, we should be asking: What is best for the student?

We all know that it will be difficult, and even expensive, to change the start times for our high schools. If it’s in the best interest of our students, we must do everything possible to make it work. The evidence is out there, so let’s make the policy change and do what’s best for our students.

Nashville School Board Member Tyese Hunter is out with an editorial in the Tennessean where she discusses facts around Nashville’s charter schools.

She compared this recent report to the data from the MNPS Academic Performance Framework, which showed that many charter schools were labeled as high performing.

She also discusses a report that showed that charter schools are teaching more students of color, more economically disadvantaged students, and more students with disabilities than the typical public school.

But more than just laying out the facts, Tyese Hunter calls out her fellow school board members who ignore any data or study that doesn’t fit their belief system. 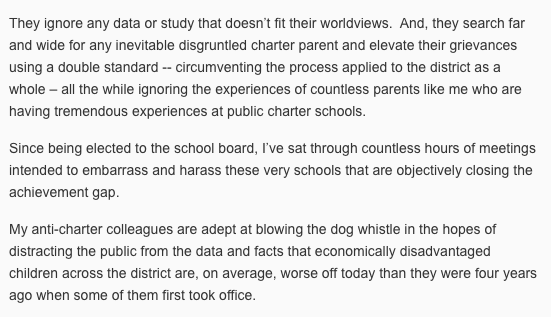 Following yesterday’s House Education Subcommittee meeting covering HB 0702/SB 0830, which creates a state-level charter school authorizer, most news outlets related this particular piece of legislation to the rejected application of Great Hearts Academies in their desire to open five charter schools in Nashville.  We did too.  It got me thinking about the nomenclature, having referred to the Great Hearts story more than once myself.  Without further ado, a working list (the first two are me):

There’s a dissertation here somewhere, I’m sure of it.