We’d like to the thank the voters in the Nashville Scene Readers’ Poll who selected Tennessee Education Report as #2 in the Best Political Blog category.

We’re honored to have earned the respect of readers, having landed in the Top 3 in 2013 and 2014 and earning our highest ranking this year. 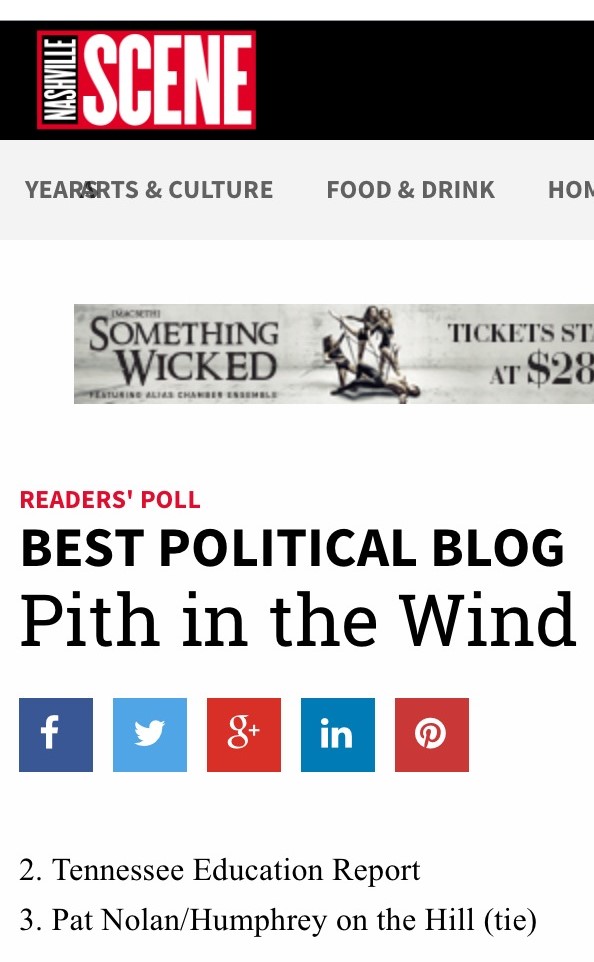 Steve Cavendish at the Scene offers some insight into the Tennessean’s recent dealings with MNPS board member Will Pinkston. Specifically, Cavendish notes that key facts seem to be optional in the paper’s reporting.

That Sunday story by Jason Gonzales, which described Pinkston as a bully, interviewed a lot of critics. It quoted a former director of schools that Pinkston stopped from getting a contract extension, an innovation director who routinely fought with Pinkston and other board members and a paid political operative working for (Jackson) Miller.

And points out that the Tennessean also endorsed Pinkston, a fact not mentioned in the Gonzalez piece.

Of course, on the same day, the Tennessean did allow Pinkston to respond.

But, as Cavendish points out, it would have been a lot easier to just include the relevant facts in the first place.

From their media advisory:

After weeks of contradictory and confusing statements from Metro Schools about its proposed “Third Way” proposal, East Nashville United (ENU) will host a town hall meeting to raise concerns about the future of the Stratford-Maplewood cluster. This open meeting will be held on Sunday, November 9 at 3:45 p.m. at the East Park Community Center, 600 Woodland Street, 37206.

ENU, a parent-led coalition formed after the announcement of sweeping changes to the Stratford-Maplewood clusters, invites all members of the community to join this discussion around the lack of community input into the school plan. The group has also invited MNPS Director of Schools Dr. Jesse Register, Executive Director of the Office of Innovation Dr. Alan Coverstone, and School Board Member Elissa Kim to share their thoughts on the district’s proposed changes and to take questions from the community.

“The district’s plan will affect every public school parent in East Nashville,” says John Haubenreich, ENU’s chair. “We’d like to invite parents and all stakeholders to our town hall meeting to learn more about the district’s actions and what it all means to them.”

ENU would like to particularly discuss the district’s plans for Inglewood Elementary and Kirkpatrick Elementary, particularly in light of the apparent agreement to turn Inglewood over to KIPP that surfaced last week. This news broke after the Nashville Scene published emails from Coverstone revealing that the district engaged in detailed negotiations to hand over Inglewood to KIPP weeks before Register’s announcement of his “Third-Way” proposal. The plan for Inglewood is in direct contradiction to comments made by both Coverstone and Register to Inglewood parents. Both had said no plan is set for the school, with Register telling Inglewood parents he would recommend against a charter conversion.

“Dr. Register appears to be making this stuff up as he goes along. That’s not exactly comforting to those of us who raise our kids here,” Haubenreich says. “From everything we can tell, his plan will close down some schools, convert others to charters, and affect pathways for students throughout both clusters. So far, there has been no real community input whatsoever.  Any plan like that is simply going to destabilize our schools instead of improving them.”

Dr. Register has pledged to put his sweeping plan before the school board in December. As of publication, Metro has yet to announce the members of the task force it agreed to create last month.

For more on this issue:

East Nashville Parents Call on Register to “Start Over”

MNPS and East Nashville United Debate the Meaning of Some Emails

Tennesseans Reclaiming Educational Excellence (TREE), a statewide, grassroots group that formed in part in response to a push for a statewide charter authorizer, is talking School Board races. Specifically, they take a look at the races shaping up in Nashville.

From the Nashville Scene  “Those with the biggest war chests have something in common: a friendly, if not embracing, attitude toward charter schools. In the four races — touching the Antioch, Hillsboro, McGavock and Overton clusters — each features… challengers who want charters to play a bigger role in Nashville’s education system…

But his wife, Mary DeLoache, has spread $6,000 evenly among this year’s four charter favorites. Other former organizers of the PAC have given too, including Townes Duncan (who gave the maximum contribution of $1,500 to Pierce and $500 to Dixon) and John Eason (who split $1,000 between the same two). Both Duncan and Eason work for investment companies… Others in the business community have also spread their wealth, giving maximum or near max donations to all or most charter-friendly candidates.”

Be sure to look closely at your school board candidates, their financial supporters, and whose agenda they will carry. Will the candidate you vote for represent you, or special interests?

Local pro-public education groups that are covering local races include the following:

You can look at the full election calendar here.