So, apparently, Americans for Prosperity paid for a texting campaign that reached a number of Nashville residents today. The focus: Signing up for Tennessee’s voucher program. The problem, of course, is that just YESTERDAY, that same program was halted by a Nashville judge as it was ruled unconstitutional. It seems like someone at Americans for Prosperity would have been aware of this and cancelled the campaign. Or, maybe prosperity just means the ability to waste ALL the money?!

Someone should maybe tell James about all this.

The School Board elections in Williamson County were fought on one primary issue: Common Core. A group of candidates who strongly opposed Common Core were supported by the Koch brothers-funded Americans for Prosperity and won a majority on the School Board.

Some of these individuals have expressed support for vouchers and for bringing charter schools to Williamson County. Those are two primary goals of AFP.

Alvey on Education offers a view of what’s happening from a Williamson County parent’s perspective. A recent post there discusses a pending resolution at the School Board level that would denounce Common Core. Of course, it seems increasingly likely that Common Core will die an early death in Tennessee. But, the post offers some insight into what is happening now in one of the best school systems in Tennessee.

The article concludes with a prediction:

So that’s why the board will vote to approve the anti-Common Core resolution. But don’t take my word for it, come see for yourself what is going to go down at the Oct. 16 board working session. Formal meeting on new board chair and vice-chair starts at 6pm. Expect lots of AFP t-shirts, and lots of crazy from 912ers. If you want to attend, and not get confused with those groups, put on a WCS or FSSD school shirt, or a Be Nice shirt, to show you’re a real local and not an import. Doors open at 5 pm, and you’ll want to get there earlier rather than later.

But the whole piece is worth a read to get some background on the players from inside and outside Williamson County seeking to disrupt what was once a quiet, and quite successful, suburban school system. 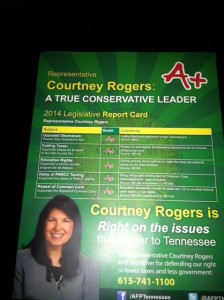