The ASD recently announced Neely’s Bend as the school that will be converted into a charter school by LEAD. There is currently a data war going on between both sides. Because of that, I wanted to just provide data on both of these schools. I will literally copy and paste data from the state for to decide. Many people in this data debate always discuss the Proficient/Advanced students. I will discuss the Basic and Below Basic students who are falling behind.

First, Neely’s Bend had 548 students last years. Madison had 756 student. The ASD picked the school with over 200 fewer students.

Using the Report Card from the state’s website, I found this information: 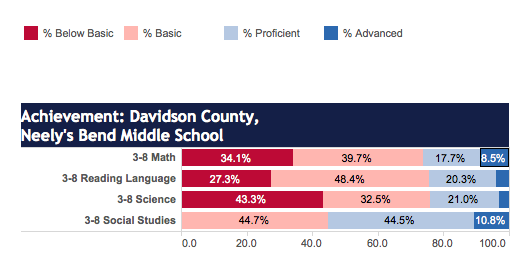 When looking at TVAAS, we see the Neely’s Bend has an overall score of 1 and the rest of the scores were 2s.

Madison also had an overall TVAAS score of 1, but we see higher TVAAS scores in Numeracy and Literacy/Numeracy and lower score in Literacy compared to Neely’s Bend. 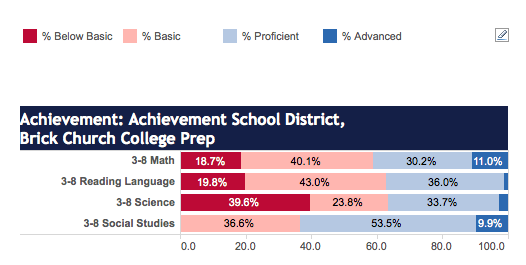 Brick Church College Prep had an overall TVAAS score of 5, higher than both Neely’s Bend and Madison.

In the match up between Neely’s Bend and Madison, the ASD went with the school with

In education circles across the country, the word data is treated like a curse word. We need to use data in school systems to find out where our students are. It’s horrible that only a fourth of our students are proficient or advanced in Reading in Math at these schools. It’s not just Neely’s Bend and Madison where this is a problem. It’s all over, in both traditional and charter schools.

The hardest part in being trained as a researcher is that you must put your personal opinions asides and look at the data. It’s hard because I have a lot of strong opinions. I know many people will tell me the data is off with Brick Church College Prep. But at this point, Brick Church College Prep is doing better when it comes to the tests we are giving our students.

As leadership changes take place at Metro Nashville Public Schools, I look for a new Director of Schools who can hit the ground running to help our elementary schools.

3 thoughts on “Data between Neely’s Bend, Madison, and LEAD.”