After learning that their school has been placed on the “Priority” list as a result of its TCAP scores, some parents at Inglewood Elementary School in Nashville are pushing to prevent the school from being handed over to the Achievement School District (ASD). The PTO has posted a letter from a parent pointing out the positive changes made at the school over the past three years. The parent suggests that with more time, Inglewood will show steady improvement.

A recent analysis of ASD results indicates parents are right to be skeptical. The analysis, published in full over at Bluff City Ed, indicates that the ASD did not no better than district schools in English/Language Arts (ELA) and actually performed worse in Math. So, if Inglewood becomes a part of the ASD, parents might expect the same results — that is, no real improvement from where they are now or, worse, a falling behind.  That’s a difficult pill to swallow for parents who have seen evidence that their school is turning around. 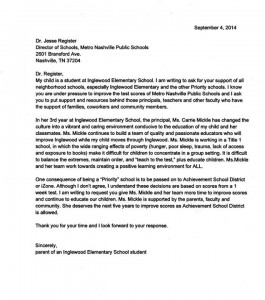 5 thoughts on “Resisting the ASD”