The first day back to school is always an exciting time! But for MNPS, there are some problems lingering over it.

MNPS announced late last week that Overton High School would start two days late because construction was not completed at the school. News came out today that Overton may push back the first day again. I was at Overton late this summer, and there were literally no exterior walls on parts of the building. A plan of action should have been put into place earlier. On July 26th, someone tweeted school board member Will Pinkston about the delays at Overton. He responded, “Don’t like it, call the charters.”

Lead in the water

Friday news dumps are used to avoid the media. MNPS used a Friday news dump to let the city know about the results of the lead testing. As one would expect, there was lead found in numerous buildings across the district. Here’s part of the report:

With results in for 138 buildings, 119 buildings had no lead levels above the public drinking water standard.  Of the more than 4,000 samples taken during the past three weeks, only 38 showed lead levels above the standard of public water systems (15 parts per billion) – that is just less than one percent of the total tested. All 38 of those sample locations, which are in 19 schools, have been disconnected and taken out of service until repairs can be made and water retested.

According to the lawsuit, the girl was “subjected to unwelcome sexual contact by a male student” April 17 in an unlocked classroom while another student recorded it on video.

“This practice was so widespread within the Defendant’s school system that the students nicknamed the activity ‘exposing’ the individual involved,” the lawsuit says. The videos prompt ridicule as they are circulated around the school and internet, the lawsuit says.

The lawsuit says when the school learned of the video, it violated Title IX by suspending the 15-year-old girl and doled out no discipline intended to stop the spread of the video. The two other students involved were also suspended, according to the lawsuit.

It’s a yearly problem felt across the country. WKRN reports that MNPS is short 140 teachers. Most of shortages are for math and special education. We need our leadership, both central office and school board, to focus on ways to retain our teachers.

Metro Schools says it has about an 80 percent retention rate. That means in a school district with about 6,000 teachers, about 1,200 teachers leave each year. Half of those teachers leave after only a year or two of teaching.

LEAD Public Schools released the news that their CEO, Chris Reynolds, was resigning days before the start of the new school year. Without missing a beat, Will Pinkston wrote an open letter attacking the school and paid for it to be advertised on Facebook. In his letter, Pinkston wrote,  “I am writing to demand a detail explanation of the reasons behind Reynold’s departure.”

Parent and blogger TC Weber had the perfect response detailing the scores of people that have left MNPS in just the past few weeks. According to Pinkston, the loss of MNPS staff is nonsense. 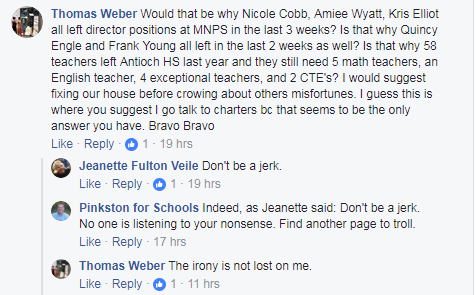 I agree with TC.  Let’s spend the necessary time and effort to make our school system better before we go off attacking others.

One thought on “#BacktoMNPS Problems”