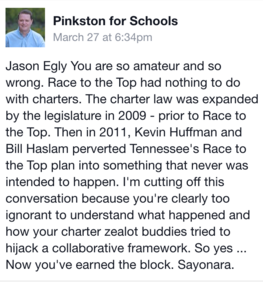 Before I break down the Race to the Top application, let’s revisit the Will Pinkston of 2013 after he was elected to the school board. In 2013, Pinkston praised Kevin Huffman and Bill Haslam for their work in continuing the reform started under Bredesen. Pinkston also endorsed Haslam in 2010, around the time he worked for Bill Frist’s State Collaborative on Reforming Education (SCORE). 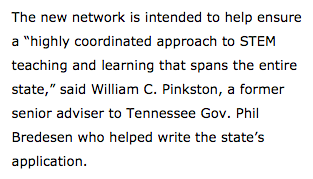 The current landscape of Tennessee’s charter schools was mapped out years ago in this Race to the Top application. The ASD has partnered with charter schools to help turnaround school districts and state and city leaders have gone out to recruit charter school leaders. We have seen both of those items happen right here in Nashville.

If the Race to the Top application had nothing to do with charters, why was so much of the application about charter schools? The state, and their grant writers, knew what they wanted. They wanted more charter schools in the state of Tennessee. They got their wish.