As the Tennessee General Assembly considers vouchers as part of the education agenda this year, it is important to look at the evidence. That is, do vouchers work? Do voucher programs lead to improved student outcomes. Until now, most research has been mixed, with some suggesting modest gains for students, while some studies showed no significant improvement. These studies focused on older, typically smaller programs.

Now, however, there is data on some statewide voucher efforts. That data suggests, quite strongly, that vouchers don’t work. In fact, the studies indicate vouchers actually cause student achievement to decline.

Vouchers the wrong choice for Tennessee

What Tennessee Can Learn from Louisiana on Vouchers

Just a group of moms and dads and teachers and administrators and engaged community members working together to make Tennessee schools great. Sounds nice, right?

That’s how the issue advocacy group Tennesseans for Student Success describes itself. Here’s the official description from their website:

Tennesseans for Student Success is made up of moms and dads, teachers and parents, administrators and education leaders, and community and elected officials. If you are interested in joining our work, we have a place for you to be a part of this historic work.

We hope you’ll join us in one of our Coalitions for Student Success. Our students are more prepared for their next steps than they have ever been before. Tennessee’s kids are now better prepared for life after school, but there is more work to be done. We need your help as we all work to spread the message of student success in counties and communities across the state.

See, a perfectly positive group spreading the message of student success all across Tennessee.

And then there’s this:

They sure don’t like that Gloria Johnson. You know, the former state rep. running for her old seat. The one who stood up to Bill Haslam and to special interests seeking to privatize public schools by way of vouchers.

Their involvement in the 13th district House race is more interesting in light of a twitter encounter back in August relative to the Nashville School Board races. 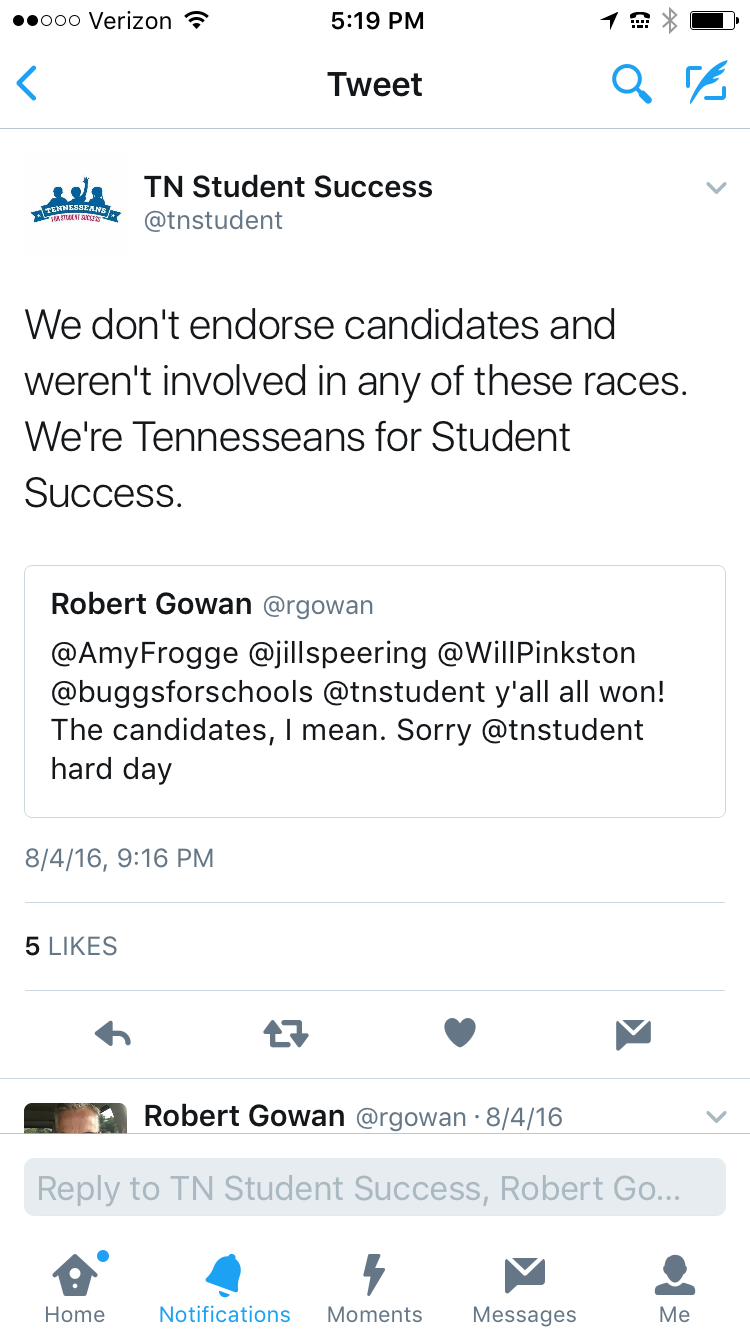 So, they don’t endorse candidates? True, the ads against Gloria Johnson don’t technically ask voters to vote against her. But, the message is pretty clear.

Then, there’s this press release from after the August primary:

“Every election day brings the possibility of changing course in the General Assembly. As Tennessee’s students, teachers, parents, administrators, community leaders, and education advocates continue their work to make sure every child in the state has the opportunity to succeed, it is paramount Nashville stay focused on student success. Tennessee kids are the fastest improving in the nation in education and every elected official must be committed to that work.

“Tennesseans for Student Success this summer spent time across the state engaging with voters about our advocacy for all Tennessee classrooms. From school tours in Knoxville to Days of Action in Brentwood to reading events in Bolivar, we worked to advance and protect education reform throughout the state.

“As we celebrate the victories of Senator Dolores Gresham, Senator Steve Dickerson, Representative Charles Sargent, Representative Jon Lundberg, and Representative John DeBerry we are grateful voters considered the message of student-centered, commonsense education reform and voted for what’s best for their children, their teachers, their classrooms, and their futures.”

Hmm. All the candidates they are celebrating are also lawmakers who support school vouchers. While the candidate they are warning voters about, Gloria Johnson, opposes vouchers.

So, what’s the story? Is Tennesseans for Student Success a nonpartisan issue advocacy group just trying to help our schools? Or do they believe that liberals can’t also support student success? Or are they a front group for a Haslam Administration that supports school vouchers?