The Tipton County Board of Education passed a resolution last week calling on the Tennessee General Assembly to repeal the Common Core State Standards and replace them with Tennessee Standards that ensure students are prepared for college, career, and/or the military.

The resolution notes that the Common Core Standards, currently guiding Tennessee schools, were developed without input from Tennessee educators. 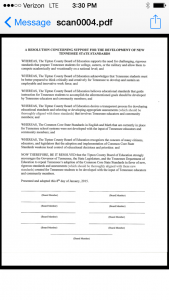